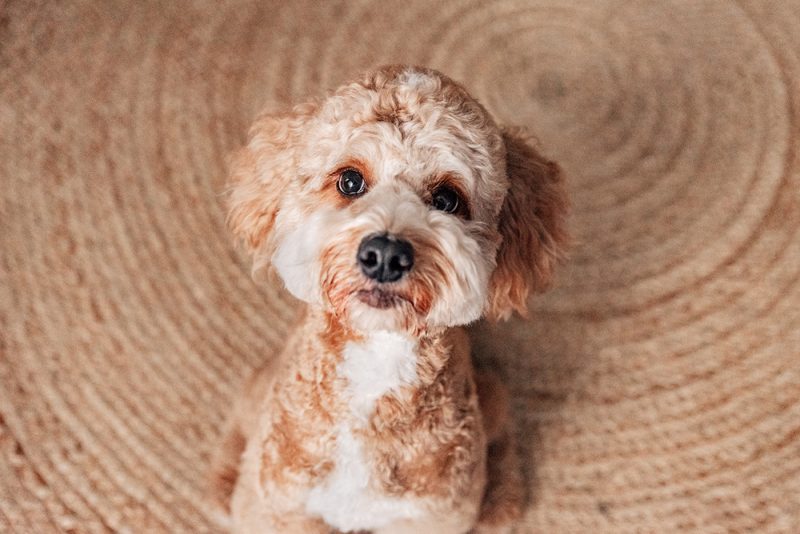 Here are some misconceptions (myths, if you want to call them that) that have been repeated so many times that they are often perceived as facts. Perhaps you’ve heard of some and believed or shared them. Admittedly, I’m guilty of this very thing, more than I care to admit (for shame!). In any case, we want to clear up any confusions and clarify some things. These myths are presented in no particular order, and you might have a few you may have heard, that aren’t listed here.

As with anything you read on the internet, including our website, don’t take it at face value — after all, this blog article is all about not believing everything posted without doing your own research. That being said, we do our best to provide content that can be backed by research and linked to those studies.

Myth – You shouldn’t groom a Doodle until they’re 1 year old.

There are a great many unfamiliar sights, sounds, smells and actions going on in a typical grooming salon. For instance, professional clippers and high velocity dryers aren’t often part of a pet owner’s routine for the new puppy. (Typically, puppies are bathed in the sink and towel dried at home.)  Some dogs are intrigued by them. Others are frankly terrified. Imagine the first time your Doodle is approached by buzzing, vibrating clippers, especially around her head. In such a situation, were I a Doodle, I might be panic stricken enough to do some fear-biting. Wouldn’t you?

Being handled by someone besides you carries over to vet visits as well. Early grooming teaches your puppy to stand patiently on a grooming bench or an exam table. Start early and make the first few sessions more about getting acquainted with the process, rather than full grooms. By the time your puppy has turned 1 year, they will be pros. Not to mention, your groomer will appreciate your help in creating an easier to groom dog.

Also, there’s the reality of coat maintenance. Going from fuzzy baby to slightly gangly young dog involves changes that affect coat texture. If not monitored and properly groomed with metal comb and a good slicker brush, a puppy’s coat can develop mats quickly. When that happens, the only humane option is to shave and start over. 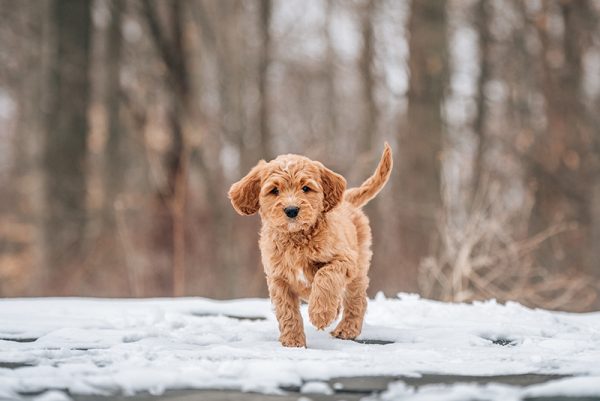 Myth – You need to meet both parents of your puppy.

Being a Breeder is not the same as running an equivalent human baby adoption service. Not even close. For one thing, a mother Doodle who has a new litter of puppies is very protective of her little family. This is a survival mechanism and is a normal part of the mama dog’s psyche.

She doesn’t take kindly to having strangers around and likely won’t be on her best behavior.

The sire of your puppies may even be owned by another breeder who lives elsewhere. This is standard when the breeder needs unrelated lines for a pairing. Thus, you don’t have the option to meet him.

Many reputable breeders have their parent dogs living in guardian homes to give them one on one attention in a normal family. When the puppies are nearly 8 weeks old, typically the mother dog returns to her guardian family, just a few days before the puppies get adopted into their own homes. We prefer this time frame to avoid stressing them out with people she doesn’t know. Pick up day is quite busy and exciting — for the humans. But to a mother dog, it can cause undue anxiety.

Usually, the intended purpose of meeting the parent dogs is to gauge the likely temperaments of your future puppy. While heredity plays a role , there are many other factors such as environment and a dog’s total experience that contribute to the temperament.

Myth – Only ‘greeders’ breed for profit.

Despite the stigma, it’s not only acceptable for breeders to make a profit, it’s imperative to sustain the ups and downs. In any business, especially one that’s home-based, the main objective is profit. It is important to build a cushion against inflation, slow times and any unexpected expenses that are bound to occur.

Another perspective we often encounter is that if you love what you do, you shouldn’t profit from it. While this sounds very altruistic, having a passion for what you do AND being fairly compensated are not mutually exclusive. After all, veterinarians, groomers, and trainers are not vilified for the same thing. Responsible breeders know their worth and price accordingly.

Myth – It’s healthier to breed every other cycle.

In reality, the opposite is true. As long as a mama dog is in good health and bounces back well after each litter, there’s no reason to skip a cycle. That said, we don’t automatically breed back to back. We have to look at the bigger picture.

There are many other things to consider when deciding whether to breed a mama dog at the next cycle. Was the last pregnancy and delivery smooth? Did she deliver an abnormally large litter? Do we have enough interest to easily find homes for an entire litter? We weigh the pros and cons each and every time.

Overall well-being will become more obvious as the mother dog progresses in her ‘career’. When a mama is healthy and exhibits the normal nesting and pre-delivery restlessness, that’s one thing. But if she’s obviously in distress, that’s quite another. At that time, it’s up to the breeder to either skip a cycle or two, or to discontinue using that mama dog altogether. Consultation with the breeder’s reproductive vet is called for, at that point.

Because most of our mama dogs reside with their guardian families, we like to retire them while they’re still young. This is typically by 3-4 years old, after no more than 3 litters. At that point we have them spayed, and they enjoy the rest of their life with the family and home they’ve always known!

Myth – You need to pick out your puppy in person to evaluate the temperament.

Just as with children, the temperament of an 8-week-old puppy often doesn’t match the adult temperament. This myth goes along with the one about meeting both parents of your puppy. You’ve heard it said, perception is everything. If you see a puppy who’s relaxed and taking things easy, maybe he’s just had his dinner and he’s getting sleepy. Once he wakes up from his nap, he could be rowdy and ready to play. Same puppy, different circumstances.

You could visit the puppies – or the parents – every day for a week, and get a different reaction every time. And when you adopt a puppy and take it home to your own house, the environment changes totally. That has to have an impact on how the puppy reacts to you, his new surroundings, and the sudden absence of his mama and brothers and sisters. Everything is interconnected, and it’s the total experience that results in his attitude on a specific day. Just as in your own life, everything that ever happened to you has brought you to this very moment in time. 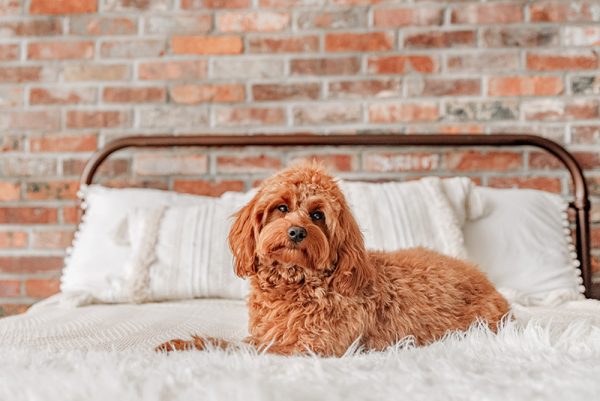 Myth – Older puppies are worth less and should be available at a discount.

While I love a good sale as much as the next person, you’ll never find me discounting older puppies. In the past, we’ve received emails asking us if we will sell an older puppy available for less.  Some falsely assume that the value of a puppy depends on being the ‘perfect age’ (no more than 8 weeks old), or that there must be something wrong with it since it hasn’t yet been chosen, or that it’s the wrong color.

To the contrary, an older puppy often has MORE value. Reputable breeders should, and often do, put a premium price on the one or two older puppies we may have, because of the extra training and love they receive here. Seriously, if you’ve ever raised a puppy from 8 weeks and on, you understand the level of work they are.

More than likely, the older puppy had already been reserved, but unforeseen circumstances forced that family to forfeit their opportunity. It doesn’t mean there was anything wrong with the puppy. And we take advantage of the unexpected extra time with it to do advanced training. Many times, the older puppy will have training on how to walk on leash, get comfortable with crate training, early grooming, start basic puppy obedience, or any number of skills.

These are also called E-collars to minimize what they do. But let’s be clear. They are shock collars, because that’s what they do. It is their primary purpose.

There is debate on both sides of this one. But the main question to be asked is, ‘Do you feel pain is ever an acceptable tool for training?’ While shock collars may seemingly get the results you want, there is more to the story. Behaviorists have noted lasting behavioral effects when these collars are used.

Think about it this way — If you could get equal or better results by positive reinforcement, why would you not choose that path?

Have you heard a myth that’s not listed here?

We could go on with more myths – heaven knows there are a great many to be exposed. But this is enough for now. Our aim is to inform and set the record straight. You may not be aware of the reasoning behind some assertions, or if there even is any. A little logic and reasoning power will go a long way to helping you figure out if a statement is true.

And we learn from our own research as well. We may not have thought much about accepting ‘conventional wisdom’ statements. But once we get into the reasoning behind them, there are two possible reactions.

You have to be kidding me!

Don’t just take our word for whether a statement is true or not. Do your own research. Connect the dots. Know what you believe and why you believe it. To get started, click on this Useful Links button or check out our FAQ section.