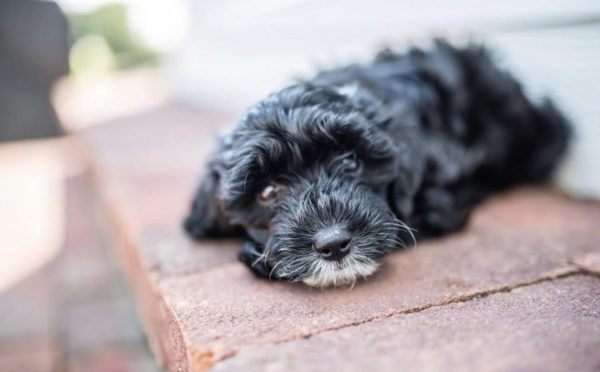 Congratulations on welcoming your adorable, cuddly new puppy into your home! Now he’s part of the family and will be the most faithful friend you could ever want. But you’ll need to gently introduce him to the house rules, aka Puppy Housebreaking Tips. The very first rule is this: Puppies need to potty outside.

Begin puppy potty training from the moment little Fido arrives. He may be anxious from the car ride to his new home, on the edge of sensory overload from all the new experiences. And it’s entirely possible that he may be excited enough to pee. So, put the new leash on him and make sure you have a yummy little treat in your pocket. Carry him to the back yard, to the quiet spot you’ve designated as Fido’s Potty Spot, and gently set him down on the grass.

Your job right now is to give Fido time to figure out what to do. The leash is to make sure he stays in the area and tends to business. Let him sniff around and explore a bit, if he wants to. No playing yet, there will be plenty of opportunity after a successful bathroom break. He may squat almost right away (depending on how long the ride was), or he may take a while. Just be patient and let him get adjusted to this process.

Then comes that magic moment when he squats to pee. Success! Give him that treat (just one, though) and pet him. Good Boy! But he might need to do more than piddle, so let him have some more time to think about that and walk around a bit. You’ll know if he has a nice poop in mind when he starts sniffing and circling a little more. When he starts getting ready, save the treat and the praise until you’re sure he’s finished. Now, you can play!

Why Crate Training is a Good Idea

Remember the old saying that one dog year equals 7 human years? Well, an 8 week old puppy is about equivalent to a year old toddler. They don’t really have bladder control yet and you’ll need to be patient and consistent while teaching them what to do and when to do it. Using a crate to corral your little fuzz ball for short periods of time is good training for life. He’ll learn that his crate (also called a kennel) is a source of security and comfort.

At Maple Hill Doodles, we give our puppies a head start on ‘smarts’ by starting Early Neurological Stimulation (ENS) when they’re 3 days old. The US Military developed the ENS method as part of their ‘bio-sensor’ or ‘super dog’ program. So, our puppies are used to some mild ‘good’ stress and should respond well to crate training. As always, be patient and kind, and don’t expect too much from Fido. He’s still just a baby.

When you shop for a crate, choose one that has enough room for him to stand up and turn around, but not big enough that he can potty on one end. The reason for this is that the puppy is to consider the crate as his den. By instinct an animal will rarely soil his den. Therefore, it’s not good to leave Fido in his crate for long periods of time when he’s still very young. If he can’t hold it, he’ll be forced to eliminate in the kennel, and over time he’ll learn that it’s acceptable to use it for a bathroom. Bad idea. Any accident will set you back in your program of housebreaking your puppy. You don’t want him to learn that he can go in his crate.

Place the crate in a quiet room, away from floor drafts. Small puppies are sensitive to changes in temperature, so you’ll want to keep Fido warm and comfy (but not hot). Even though he won’t be staying too long in his kennel during the day, you want it to be a pleasant place for him. A security blanket will help him feel welcome and he may even burrow under it for a nap. Here are some crate choices from PetSmart. 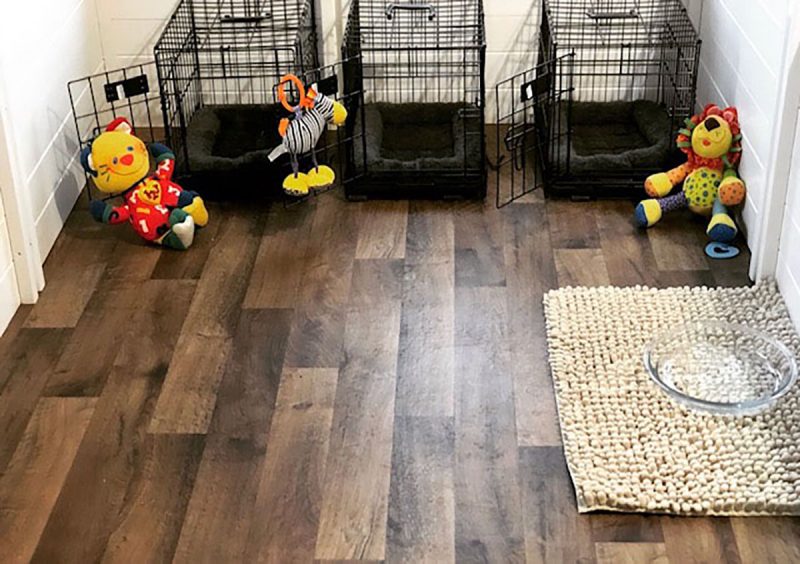 When and How Long to Crate Your Puppy

Start introducing Fido to his kennel for short periods of time during the day at first. Ten minutes at a time is a good beginning. Close and latch the crate door, and sit close to it so your puppy will know he isn’t going to be abandoned. He hasn’t been away from his own mom too long, and you don’t want to set up separation anxiety. At first he may whine or bark, and try to get out, but talk quietly to reassure him. When he’s quiet, give him a treat and tell him Good Boy.

At the end of 10 minutes, let your puppy out of the crate and take him outside on the leash. You may want to use a trigger phrase like, ‘Let’s go outside.’ Let him sniff and amble around, and when he goes, give him a treat and plenty of petting. Good Boy! He’s been quiet in his kennel for quite a while (for him), so this is a great time for play.

When you go back inside, let Fido be in the same room with you. But this is not yet the time to give him free roam of the house. Close off the room somehow, with a door, baby gate, whatever. Keep an eye on him, and if you notice him starting to sniff around, put the leash on him and say, ‘Let’s go outside!’ He may need to potty, or he may not. But we think you’ll agree that it’s better to take him outside with no results, than to have a mess inside to clean up.

Work up gradually to the point where you can leave Fido in his crate while you leave the room for 10 minutes. When he’s okay with that, increase your time to 15 minutes, then 20. Make the increases from day to day, rather than all on the same day. Once your puppy has developed enough bladder control to be comfortable in his crate for 20 minutes with you out of the room, try leaving the house while he’s kenneled. You’re working toward keeping him safe for short periods while you run a couple of errands.

Puppy House Training is a Process, Not an Event

Puppies are all different sizes and temperaments. These suggested intervals are just that – suggested. What works for Fido may be all wrong for Mitzi. You’ll find that as your puppy gets older, he’ll be able to hold his water longer. But he’ll still need to go outside at least as often as you, yourself, feel the urge. As we mentioned before, it’s helpful to compare the bathroom habits of a child to what your puppy needs. At 12 weeks, a puppy is roughly equivalent to a 2 year old toddler – beginning to get an idea of how to go in a specific place and why.

The very best times to take your puppy outside may seem to be every hour, on the hour, and that’s pretty close to the truth! Here are some highlights:

It’s very important for you to be consistent and anticipate Fido’s metabolic needs. If he’s allowed to mess in the house on a regular basis, he’ll start to think that it must be okay. Hold up your part of the housebreaking relationship, follow through and see that he learns the good habits you want. 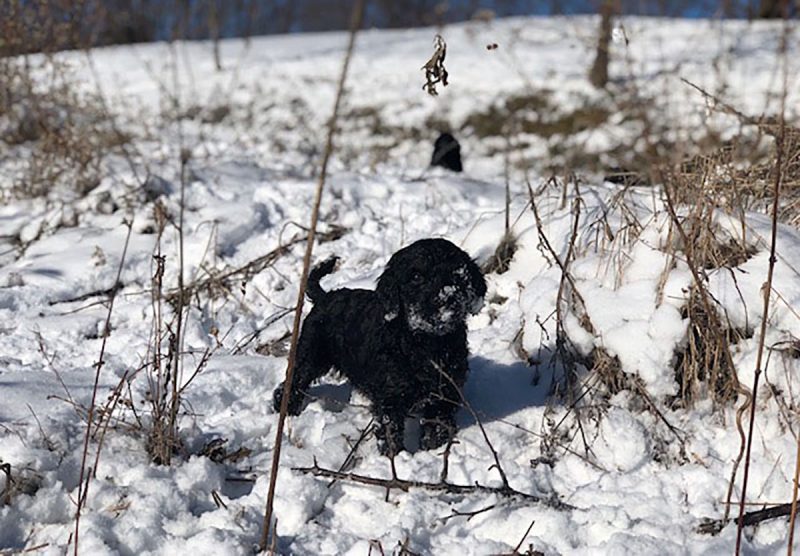 What to Do When Accidents Happen

In a perfect world, Fido will be house trained within 2 weeks and you’ll never have to clean up a mess. Stop laughing, miracles happen! Even so, it’s a smart move to keep towels and enzyme cleaners close at hand at this point. It’s best to use an enzyme cleaner, because they break down the urine molecules so there is no trace of smell to lure your puppy to mark the territory again.

Should you spot Fido squatting to make a puddle on the floor, swoop him up and take him outside to finish the job. Praise on completion (even if only a few drops) and dispense a treat as usual. Then when you go back inside, find the fresh spot and simply clean up. No fussing, no punishing. It’s just a thing, and you wouldn’t spank a baby for making a wet diaper, right?

Punishing a puppy for piddling or pooping on the floor is counterproductive at best, both to housebreaking and also to his temperament in general. His little baby brain can’t associate his normal function with making you upset, even if you catch him in the act. Simply take him outside and reinforce the behavior you want, with a treat and praise.

If this house training thing sounds like a lot of work, that’s because it is. You’ve invited this lovable little fuzz ball into your family, and just like a new baby, he’s not able to take care of himself. It’s your job to help Fido adjust to his new status as Baby Dog, transitioning to Little Brother. Believe us when we tell you that all of this attention to detail will pay off as your puppy grows into his relationship with you as Best Friend.